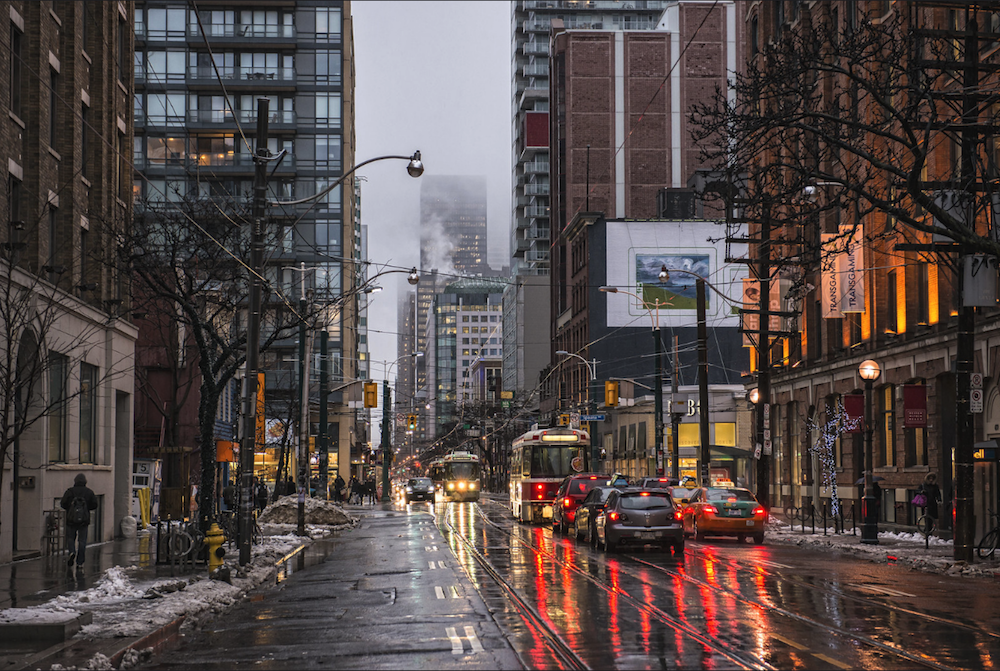 Toronto’s historic King West neighbourhood is situated in a very premier area between Spadina and Sudbury, running along King Street. This is a very unique and distinctive neighbourhood of Toronto for a multitude of reasons.  Beginning as a base for military reserves in the early 1800’s King West served many purposes for the military, until the 1850’s and development of the railway to Toronto. The first transformation began as King West quickly adapted and evolved into a very busy industrial and manufacturing hub for Toronto and Ontario. The railway allowed for ease of transportation between cities and many big manufacturing companies set up shop in the King West neighbourhood from the 1850s until the mid 1900s.

Although there are many century houses throughout the King West neighbourhood, it was not until the 1980s that Toronto started seeing King West condos for sale for the first time. The manufacturing boom of the area was beginning to dwindle and by 1990 many ran down, abandoned factories were dominantly occupying the area.  With population growth accelerating throughout downtown, the city proposed the King-Spadina Plan in 1996 which turned out to be wildly successful. Investors and developers flocked to the opportunity that was presented and began rapidly developing an urban community of King West condos, tailoring to the young professional lifestyle. This lifestyle continues today with a plethora of restaurants, bars, nightclubs, and modern condos; ultimately dubbing King West the Entertainment District of Toronto.

Living in a King West Condo

The history of King West has not been forgotten throughout the change and development of the area.  You’ll see many mixed use or residential buildings incorporating the name, or original walls of the factories that once occupied the space. Take West 833 for example, a low rise boutique condo which was once a perfume factory, converted by developers in 1997 to a full condo building.  Another great example of preserving the heritage of King West undoubtedly is the Eclipse White Wear building.  A building surviving well over 110 years which first served as a military hospital has seen transformations to an art gallery, addition of a Tim Hortons, and more recently was proposed for a full renovation to include retail and office space, while including an art gallery focusing on the history and development of Toronto.

If you’re looking at King West condos for sale you most likely enjoy the atmosphere of a lively neighbourhood.  On any given weekend you’ll find something to do at one of the many theatres, galleries, bars, or clubs.  Let’s take a look at some of the main attractions and annual shows that happen exclusively in the King West neighbourhood.

TIFF Bell Lightbox – one of the largest publicly attended film festivals in the world, attracting over 480,000 people annually.  TIFF has evolved into a year-round operation known as the TIFF Bell Lightbox which offers screenings, lectures, discussions, festivals, workshops, industry support, and the chance to meet filmmakers from Canada and around the world. TIFF Bell Lightbox is located on the north west corner of King Street and John Street.

Princess of Wales Theatre – One block away from the Royal Alexandra, this theatre was built with a stage known to be one of the widest and deepest in North America.  The interior design here is incredible, with painted wall murals, blown glass, imported wood and veneer — The Princess of Wales is a showcase of all that is best in both traditional and contemporary design.

Roy Thomson hall – A concert hall known for its sloping and curved glass design, home to multiple Toronto choirs. Enjoy many musical shows here as well as private events, galas, as well as a wine lounge and patio!

King West is not only known for its performing arts, it also offers some of the BEST views in the city for rooftop drinks or dinners.  Check out some of our local favourites once you move into your King West condo; Lavelle, KOST, Thompson Rooftop Lounge, Gusto 101, and The Porch.

I would be remiss to not emphasize the nightlife in King West. Known as the Entertainment District, King Street is, and has been, the place to be. From casual bars to celebrity packed clubs, King Street will surpass all your social expectations.  I really mean it when I say there are too many places to list so I’ll include some absolute musts if you’re celebrating a birthday, or just looking for a proper party! All of these will be within walking distance of your King West condo so please take advantage! EFS, Lost & Found, Everleigh, Citizen, ToyBox and Early Mercy round out a solid list if you’re looking to get a booth and party into the morning.  For a more laid back setting, or a place to have some drinks & apps before the club, you definitely want to check out Locals Only, Regulars, Petty Cash, and the aforementioned Porch, Lavelle, & Thomson.

Each King West condo will offer its own unique feel and design, but there should be some qualities that everyone looks for when searching King West condos for sale.  You can come to expect exceptional concierge service, resort style amenities such as party rooms, a patio or rooftop patio, full sized gym and pool, and so on.  Developers in King West also understand that there is a standard quality of design and build that is required to compete in this thriving neighbourhood. Each new condo looks to be the new best, offering more services to the residents, as well as more recently modernizing and implementing smart building technology into their projects.

Culture of a King West Condo

If the vibe of King West has not been made clear enough up to this point, let me re-emphasize that when you purchase your King West condo, you will be living in the most lively part of the city! Clubs, bars, rooftop patios and restaurants overlooking the water and having a picturesque backdrop of the CN Tower will be steps away from your front door!  Not only that but King Street underwent a streetcar project mandated by the city to improve commuters travel into the downtown core.  The pilot project was voted in to permanently remain, forbidding vehicle traffic on King Street for more than 1 block, allowing streetcar free and clear passage, dubbing it the “King Street Transit Priority Corridor”.  In layman’s terms, those looking for a King West condo for sale will have peace of mind that commuting into the core will have an insanely easy and quick commute. Living in a King West condo also allows for quick access to Lakeshore Boulevard and the Gardiner Expressway.  You will bypass a lot of the Spadina traffic when heading west out of the city making it a very desirable area for those who travel by car daily.

If history is any type of indicator, we can confidently say that King West will continue to develop and better itself.  Future development will include mid rise condos as well as integration to neighbouring communities.  Land is hard to come by in King West and as we have witnessed, the city of Toronto is committed to King West accessibility (street car project).  Moving forward we should see further infrastructure development of King West and integration of King West condos to include retail and commercial space.  We really love King West here at CondoMapper.ca and would suggest our King West Condos For Sale page to anyone who would like to experience the unique lifestyle of this neighbourhood.