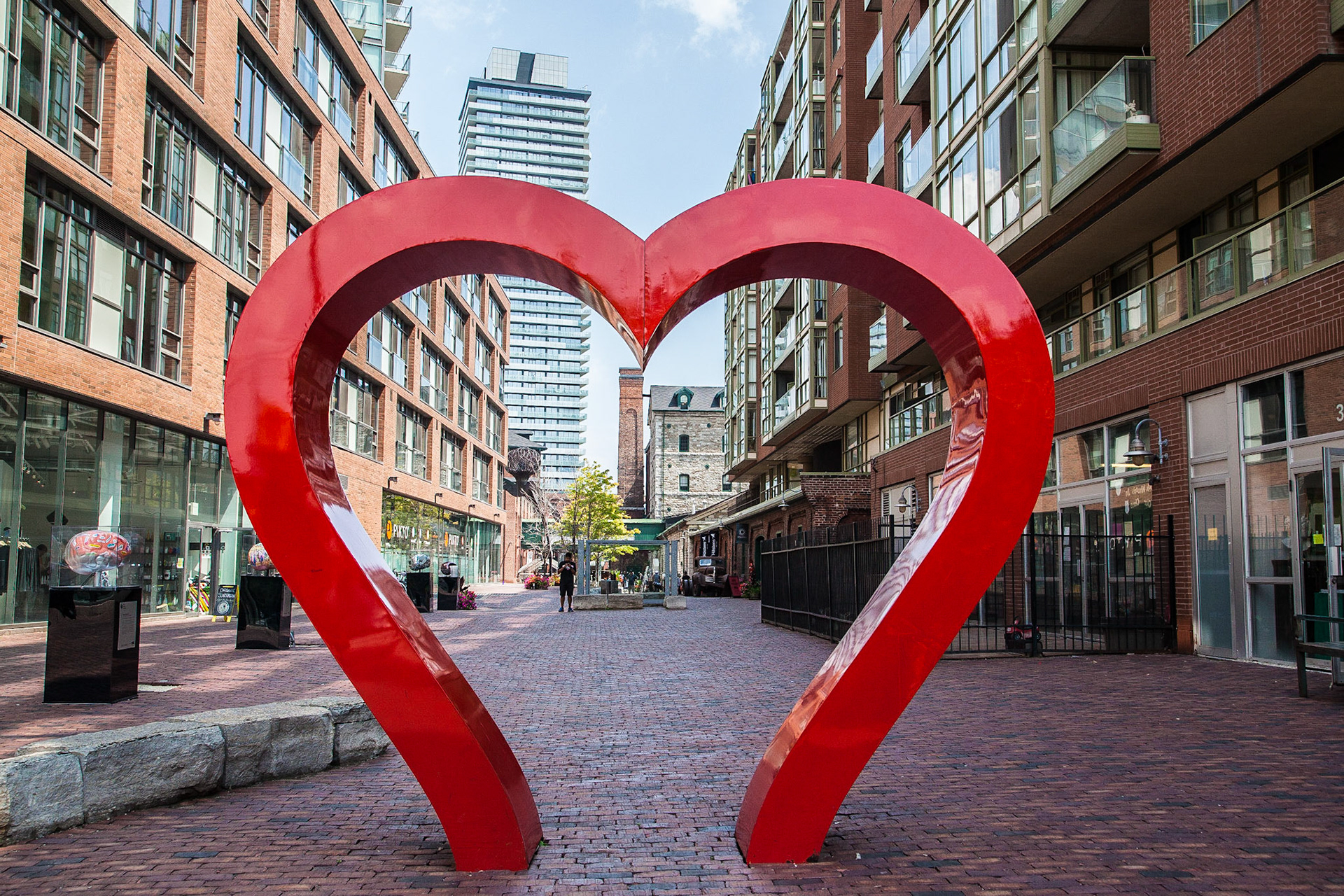 Toronto’s historic Distillery District is a preserved Arts and Culture community located in Downtown Toronto’s East End. Founded in 1832, and originally comprised of Victorian style buildings, a consortium of developers envisioned something greater for the city. The vision was clear, give the people a cultural epicentre and the people will give back a vibrant community. Bridging Art, Music, Culture, Food and Festivals, the Distillery has created a very unique imprint on the City of Toronto and in the same vane of Paris, London, Venice, Shanghai, Rome, New York, and Tokyo has created a cultural hub within one of the Worlds most profound city centre’s…Toronto!

Officially opened to the public in 2003 the concept behind its creation was to bridge a pedestrian friendly cultural hub with residential condominiums, and whimsical commercial retailers. Preserving the original architecture of the 19th century complete with industrial Victorian buildings and cobblestone walkways, the Distillery District has restored much of it’s 19th century architecture which gives us it’s universal charm. The developers responsible for the master concept sought out niche tradesmen that specialize in turn of the century woodworking, brick and stone facades, artisan designers and developers. The project encompassed the redesign of 47 industrial towers with the intent to preserve the original charm and fuse with contemporary design. The result, a clever step forward in Toronto’s cultural scene.

Today you will find a bevy of art galleries and shows, boutiques, artisan shops, modern dining, and bistros. On virtually any given weekend at the ‘Trinity Square Stage’ you will be able to experience Live music with some of Canada’s emerging artists, including special drop in guests! The vibe is very much an old world European vibe and reminiscent of the cobblestone streets you can find in Paris.

On any given weekend you will find a host of art exhibits, pop-up shops, drop-in food carts, and artisanal vendors. This is what makes the Distillery experience so special. Every weekend is different, and you never know what’s next. Attracting millions of guest every year

Some of the unique attractions you can find in the summer include the following:

The events are endless, and run year round. It’s no surprise with it’s vibrant community that there would be a huge demand for residential housing, and with this came the inception of Distillery Condos for sale. A large part of the planning and conceptualizing for the new Distillery included the fusion of Attractions and residential housing. With the preservation of Gooderham Worts and the 46 other industrial buildings, condominiums in the Distillery seemed to be a great fit. The challenge here was to seamlessly combine the two while retaining its original charm, and to do so would mean to create only a few exceptional towers and retain the pedestrian friendly neighbourhood. With only a handful of meticulously planned condominiums, residents’ desire to live where they play have been fulfilled. Some of the landmark Distillery condominiums you will find include Pure Spirits, Clear Spirits, The Gooderham, Lindenwood, 80 Mill Street Condos, and Parliament Square.  (2009/2013/2014/1998/2002/2000)

The catalyst to the development of the wave of residential towers was 33 Mill Street (Pure Spirits). We at CondoMapper.ca remember vividly the pre-market launch and incredible excitement at the first launch of Distillery’s new fleet of residential towers. People were investing into a previously derelict neighbourhood that had visions of being the epicentre of Toronto’s culture and entertainment. As with any master planned community, those who invested in the new fleet Distillery condos for sale were able to buy into an incredible new community with huge upside. Even by Toronto’s current standard, Distillery condos remain an exceptional investment opportunity in comparison to other segments of the city. The best part about the residential development of these Distillery condos for sale is that the neighbourhood is NOT being overdeveloped, and the original vision of mixed residential and commercial space has been honoured.

Another unique detail with regards to condos in the Distillery is the wide array of floor plans being developed. In the first major development Pure Spirits, a total of 17 unique floor plans were launched not including the Penthouse Suites. The subsequent two towers (Clear Spirits and The Gooderham) followed suit launching a wide assortment of floor plans from 500 square foot junior suites to 1,500+ square foot signature suites. The goal was to accommodate both young professionals, as well as growing families and down-sizers.

Highlighted by their inviting lobby entrances and warm concierge services, Distillery Condos are a far cry from the sterile condominiums you might find in other parts of the city. Attention to detail and preservation of the neighbourhood’s rich history has been made. From wood beams, to sliding wood barn doors, exposed brick walls, polished concrete ceilings, exposed ductwork, you will find much of the design elements of its previous life preserved and updated. We especially love the unique floor plans, and loft elements within the suites. Another element you will typically find in Distillery condos for sale are premium building amenities and dog friendly communal areas. Sometimes in big cities like Toronto you will notice that neighbours don’t know each other, and the feeling of community is fleeting. Developers envisioned high density towers where the residents could come together and enjoy each other’s company. Elements like rooftop decks with full size pools, cabana lounges, BBQ’s and look out points can be experienced in condominiums like Pure Spirits located at 33 Mill Street. Another incredible feature in towers like Clear Spirits, and The Gooderham include the fact that virtually every suite in all 3 of the newer developments have superb views. Because the neighbourhood is not congested with new developments, whether you have an East view, or a North view the one thing that you can be sure of is that you have an unobstructed view. To the East you will have lake view exposures along with the South views, and to the North and Wet views you will have spectacular sunsets framed by one of the most inspiring city views in Toronto. Even on lower podium levels you will have favourable views of The Distillery streetscape which is a premium view in and of itself. One more consideration we absolutely love about Distillery condos is the iconic future developments coming up in close proximity.

Other noteworthy Distillery condos for sale include:

There are some fantastic dining options in the Distillery including Mexican, Gastropubs, Coffee Bars, and Chocolatiers. Part of the charm of the Distillery is the fact that there is something for everyone, and a wide array of options at that. Some notable options include:

A personal favourite is the Contemporary Mexican Cantina El Catrin. Awarded as the Best First Date Restaurant, One of Toronto’s Best Mexican Restaurants, One of Canada’s Best New Restaurants, and many more. The atmosphere is fantastic and embodies the spirit of the Distillery.

Shopping Near the Distillery Condos

There is an eclectic selection of Retailers in the Distillery including chic vintage clothing shops, boutique fashion, Holistic Health Shops, Whimsical Accessory Shops, Beauty Counters, Hip Eyeglasses, Creative Jewelry Counter, Gift Shops and more. One of the shops we would highly recommend checking out is City Of Angels for an authentic Los Angeles California clothing vibe. Really nice unique pieces, and totally fits the vibe of The Distillery.

Culture in the Distillery District

To truly appreciate the luxuries provided at The Distillery is for one to take one of the many arts and culture events. Some of the attractions and theatre that you can take in include:

The overall vibe in The Distillery is a perfect balance of Adventure Seekers, Artistic Types, Couples frolicking on date night, out of town guests of Toronto, and locals looking to see and be seen. You won’t find the pretentious crowd here, but you may run into your soul mate. The Distillery is a magical pocket of the city and we would encourage you to drop and experience all of the Distillery Districts charm.