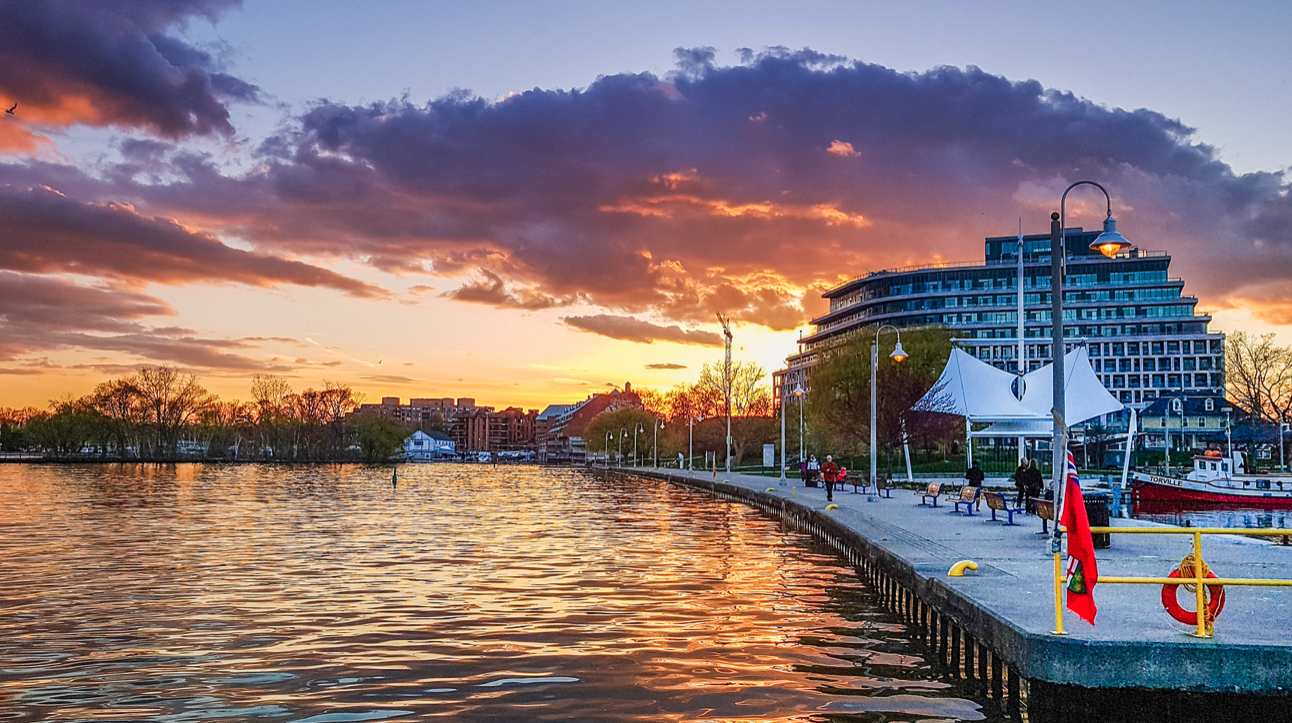 Located about an hour by transit or 30 minutes by car, it is no surprise that some call Oakville charming and quaint. While considered a city within the Greater Toronto Area (GTA), Oakville has a surprisingly modest population and is home to a beautiful collection of well-preserved heritage buildings.

Oakville is right along Lake Ontario, neighbouring Burlington to the west and Mississauga to the east. Oakvillians have access to their own GO stop and a VIA rail connection, as well as quick access along the 403 and 407 highways. With lots of nature and plenty to explore, residents love the modest pace of this charming city.

If you’re looking to move to the GTA, then you’ll want to consider Oakville. While Oakville is part of the GTA, one of Canada’s most densely populated areas, Oakville spreads out more. It also offers residents a chance to explore some of Canada’s heritage sites. The city has a downtown strip built up when it was a thriving transport port back in the 1800s, and some of the historic buildings remain today.

Modern builds have improved the waterfront value, so don’t expect to see Oakville condos for sale with little to no amenities. Oakville residents will get to experience the best of both worlds – modern living at a more laid-back pace, all while still connected to the thumping Downtown Toronto hub.

In addition to slightly more affordably living, residents will love the connection to nature. The local community is avid sailers. If you love the open water of Lake Ontario, then you can quite quickly get a boat, kayak, or canoe out on the water. There are plenty of waterfront parks, including Burloak Waterfront Park, which is just steps away from the waterfront condos of BluWater Condos Oakville. Shell Park and ShellSkateboard Park are just past the Petro Canada Pier, and residents can also enjoy Shelburne Creek Park right along the water.

If you want to stay connected to nature, then this is a great place to be. There are so many beautiful nature scenes here! Residents and visitors alike mainly head to Bronte Beach park, the Bluffs and the Waterfront Park, home to the Bronte Heritage Park. Sit and watch the sailboats coming in and out of the harbour, or hop on one yourself.

In Bronte, Oakville, residents have access to their own Coronation park, again, along the waterfront. Head north, and you’ll be able to explore the Bronte Creek Provincial Park and the sprawling Lion’s Valley Park. Once up this far north, you can explore the horses at the Range or head to Rattlesnake Point for some of the GTA’s best views.

Officially or not, you’ll want to go on a Heritage Tour of Oakville, as this neighbourhood is home to many historic sites and a community that promotes heritage preservation. From Oakville’s Old Post Office to the Merrick Thomas Farm House Museum, there are plenty of these glimpses into the past that makes Oakville feel more like a small-town than anything.

Established in the early 1800s, Oakville Harbour allowed for prosperity in the region. Oakville was also considered a hub for the Underground Railroad, offering refuge for African-Americans who fled the United States. Notable estates in the area include:

Other landmarks include The Old Granary, a cultural landmark as the first tavern set up in Oakville and probably one of the earliest buildings constructed. Oakville House was a hotel, which now operates as a boutique restaurant and a fitness studio on the upper levels. Weller Stage Coach Transports used to be housed in the Oakville House, where a gentleman named William Weller operated the Telegraph Line in 1835.

Last but not least, in the village of Bronte is the Bronte Post Office, which was built in 1851, another must-see site. Now it operates as an art gallery. The Oakville Museum will give you much insight into these historical places, so be sure to connect with the Museum down by the Oakville Downtown to explore more of this rich cultural history!

One of the more well-preserved cities in the GTA, Oakville’s heritage charm is surprising and a hidden gem. Many of the downtown buildings will regale you back to a different time, keeping you inspired.

While modernized and growing, Oakville condos for sale are not as built-up and gentrified as the Downtown Toronto hub. This means that you can get fantastic waterfront properties for an excellent price! Still get excellent amenities, as well as perfect Lake Ontario views and more fresh air!

One of our favourite Oakville condos for sale includes the Bluewater Condos, a mid-rise built in 2015. These condos are right on the shoreline, so either you are steps away from the water or have a beautiful Lake Ontario view. Oakville condos for sale come in a wide range of suite sizes, especially here at the Bluewater Condos. Suite sizes start around 357 square feet and go all the way up to 2,716 square feet.

Other amazing Oakville condos for sale include The Shores, a wide contemporary condo building that spans four blocks. This white concrete condo building offers suites with stunning Lake Ontario views, all just steps away from the harbour front. If you’re looking for a condo building with all the latest amenities and then some, then we would highly suggest The Shores’ two-bedroom units. Each unit comes with a balcony, so you will always be able to enjoy your morning cup of coffee overlooking a beautiful view.

There are plenty of spacious and contemporary Oakville condos for sale. Consider a suite at:

Oakville has a range of modern builds, lakeside condos, and older but updated condos for sale, all with something unique to offer. Like the units at Oak Park Condos, with pre-engineered hardwood floors and stainless steel appliances. These condos are away from the harbour centre but still are close to the water and well-connected to Oakville’s downtown.

A popular spot for locals, Downtown Oakville, is located along the street of Lakeshore Rd East, at the conjunction of the Sixteen Mile Creek. Here you’ll find some wonderful eats, like The Crepe Kitchen, The Oakville Club, Maro’s, La Dolce Vita, and Brü Restaurant.

Stop in for dinner after shopping around town. Buca Di Bacco offers some tasty Italian fare after shopping at some of the local boutiques. For dining, consider the One Five One Social, an interesting public house style joint offering a range of unique offerings, from barbacoa tacos to cured beef and pancetta. Oh, and don’t forget about Seasons, a historic spot with three private dining rooms and hard-brick accentures.

The Downtown Oakville area is also home to the Oakville Public Library and the Performing Arts Centre, which hosts theatrical performances annually. From Anthropologie to MUST Boutique, there are lots of fun and quirky stores to choose from.

For nightlife, we recommend some of the bars along Kerr Street, such as Dirty Martini Oakville, Less Than Level, and The Moonshine Cafe for live music and wings! With a range of sports bars, British pubs, live music, and brew pubs, there is plenty to keep you busy for a night out on the town!

Of course, you can always consider joining the Yacht Club, or more commonly known as the Oakville Club. Established in 1907, this well-run club is a great place for socializing, activities, and of course, getting out on the water!