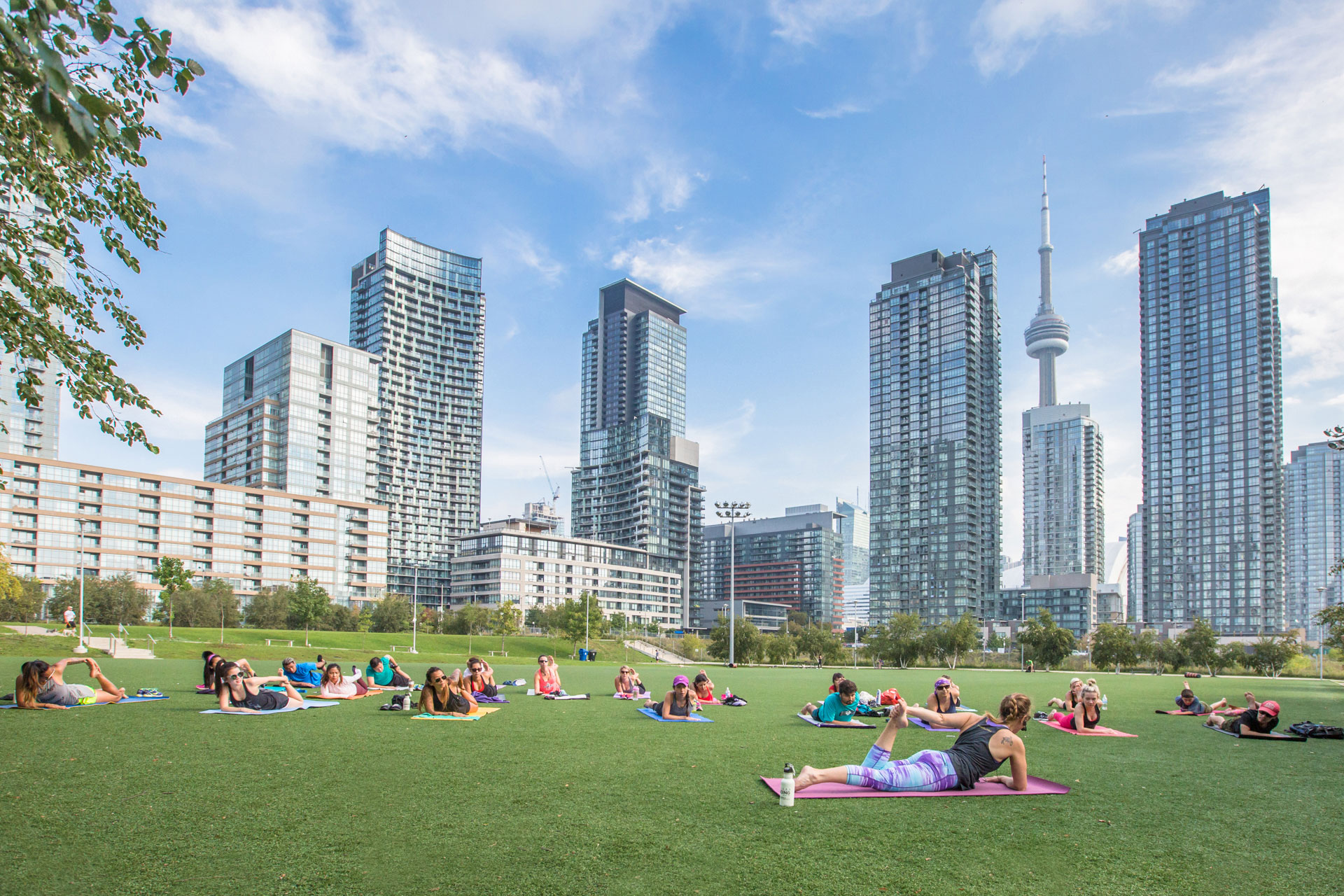 The largest master planned community in Toronto, CityPlace is considered the gateway to the downtown Toronto core. Formally known as the Railway Lands neighbourhood in Toronto because of how the railways ran through the district, CityPlace has been transformed into a pedestrian friendly residential community.

Developed by the prolific Vancouver developer Concord Pacific, Concord is responsible for shaping Canada’s most notable skylines in both Vancouver and Toronto. With 150+ high rise developments completed within their portfolio, Concord Pacific is undeniably Canada’s preeminent high rise developer. One of Concord’s hallmarks is neon accent lighting on the exterior of their towers. Residents and commuters into the city will know it is a Concord Pacific development once you see these neon lights off of the highway.

Acquiring the prime waterfront land originally known as CityPlace Lands in 1997 sales and construction began almost immediately. The first two phases of the CityPlace community were completed and registered in 2003. Optima and Apex were met with great enthusiasm in the pre-sales events and set the benchmark with their successful launches for Toronto high rise developers in the city. The next project developed in CityPlace is one that we at CondoMapper hold in high regard and to this day is one of our favourite Toronto waterfront condo projects in the city. Harbourview Estates is defined by its spectacular floor plans and sweeping views of the waterfront. Featuring 37, 40, and 49 stories, residents on higher floors have incredible views of Lake Ontario that are simply put, “breathtaking.” We’ve sold corner suites with panoramic lake views from Porter Airlines on the waterfront to the East Don Lands. This 3-phase development featuring 1,635 suites remains one of our favourite waterfront developments in the city 15+ years later. There is nothing more inspiring than waking up to an unimpaired water view and enjoying a tea or coffee on your balcony in the morning.

Next up in the CityPlace condos development in Toronto was Montage. Registered in 2019 this 47 storey point tower houses 529 suites with unit sizes ranging from 540 square feet to 1,356 square feet. With full amenities and a gorgeous rooftop garden, we started to see the evolution of the modern condo – meshing the city with elements of nature.

The following project in the CityPlace condominiums Master Planned community was Concords flagship Toronto project known as Parade. This multiphase development incorporated elements of contemporary architectural design as well as a notable upgrade to suite design. Pedestrians strolling through the CityPlace development will notice the unique “Skybridge” connecting the 2 towers in Phase 2. The Skybridge features the “Sky Lounge” which includes luxury entertaining spaces, a bar, pool tables, and of course marvellous views showcasing both the lake on the South side and the cityscape on the North side. A noticeable update in the Parade condos development was the inclusion of family oriented amenities including:  an outdoor play area for children, indoor crafts room, a day care centre for the kiddo’s and even your little fur babies have been considered with a pet spa and grooming centre. Recognizing the changing condo demographic and need for larger “family suites” as freehold house prices began to run up in 2013 and become less affordable, Parade introduced suites sizes as large as 2,630 square feet (essentially a house in the sky). Since 2013 there has been a changing condo buyer demographic in the downtown Toronto core, and Concord CityPlace has been addressing the need.

To further satisfy the demand for family housing at CityPlace, Concord has allocated a portion of their development to infrastructure initiatives to help build the culture and the vibe of the city. Some of these initiatives at CityPlace include:

Here below is a visual representation displaying the entire map of CityPlace including the condos and amenities in the area.

With over 30 residential condominiums in CityPlace housing 18,000+ residents, it is by far the largest Master Planned community in Toronto. Here is a list of some of favourite developments in CityPlace:

CityPlace condos are the gateway to the downtown Toronto core, and the most central location in the city. As the largest area of expansion in the downtown core over the last 10 years, the condos have experienced explosive growth and appreciation and remains one of the most investable neighbourhoods in the city. With a more mature infrastructure and city build, CityPlace is a fantastic neighbourhood for singles, couples, young professionals and small families. We absolutely love CityPlace and life on the Toronto Waterfront!