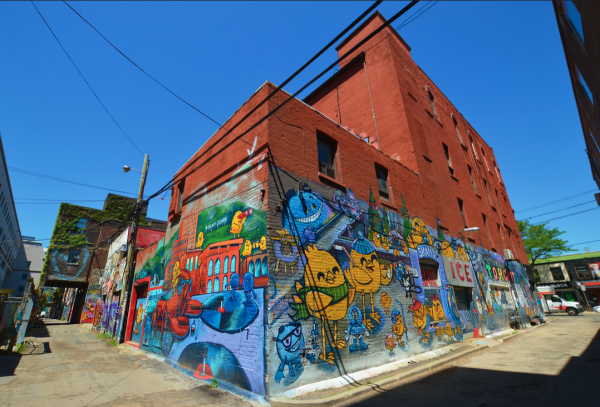 Vibrant and artistic, the Queen West neighbourhood has long been one of Toronto’s most eclectic neighbourhoods. Spanning from Roncesvalles Avenue and King Street to Victoria Park in the east end, the Queen West neighbourhood stands as one of the city’s original east-west avenues and serves as a baseline for the city’s major grid pattern. This major stretch of road has not only been here since the beginning of urban Toronto, but it also has been an evolving beacon of trendy art, booming with Canadian entertainment, fashion, and much more.

Right now, the Queen West area is home to a thriving lifestyle and it showcases the historical buildings which remain in the area. Dubbed as one of the second coolest neighbourhoods in the world by Vogue, local Torontonians have long loved the indie patisseries, homegrown labels, art galleries, and more that speckle this boulevard.

When it comes to living here, the Queen West neighbourhood gives a lot to choose from. Many residents flock to this neighbourhood for inspiration. Trendy shops, which span from artistic to historic, restaurants, and art galleries are in the neighbourhood of several large condominiums and townhomes. It’s clear that many of the residents in this area love the locale and the ease of getting out and about to explore the offerings. In fact, this neighbourhood alone, which spans only two kilometres, houses over 300 galleries, on top of shops, restaurants, boutique stores, design houses, and hotels!

Of course, living in the Queen West neighbourhood would not be as enjoyable if it did not also have access to transit and to greenery, both of which are abundant. To start, residents are close by to some of Toronto’s biggest parks, including Trinity Bellwoods Parking, which is a 38-acre park home to tennis courts, lounging areas, playgrounds, and the infamous Dog Bowl. Connect to this park either by walking, biking or by rail as transit is plenty. Other outdoor spaces, which are accessible via bike, walk, or quick transit,  include the nearby Toronto Waterfront with access to the Martin Goodman trail.

This area is also home to some of the best food around. Along Queen Steet West, residents can choose from diverse food choices, like Clafouti, the patisserie cafe, to the gallery and coffee shop Beaver, the sky lounge at The Drake Hotel, BBQ at Smoque N’ Bones, and other restaurants nearby. Trendy retail and shopping allow Torontonians to explore more than just name-brands but also home-grown vendors. Be sure to drop into:

Queen West condos for sale are closeby to the Fashion District, the Toronto Entertainment District, and close by to downtown Toronto, King West and so much more, so residents here will always stay connected.

To get a taste of what this neighbourhood is really about is to understand the trendy Queen West art scene. Queen West is known as one of the coolest neighbourhoods in the world, and it’s no surprise that this is largely due to the abundant art that is kept in the village. Creative workspaces, art schools, and art collectives have helped the art scene thrive and continue to thrive. There are so many art galleries to choose from, which makes this strip of land all the more popular. Creatives and art connoisseurs use this collective as a way of promoting the city’s unique culture. Galleries range from underground and indie to fine art and materials goods. Art galleries located in the area worth a visit include The 6 Oceans Gallery and Swig Collection. Street art is also easy to find.

Be sure to check out the Stephen Bulger Gallery, which has Canada’s largest commercial gallery that specializes in photography. With regular rotating exhibits, the Stephen Bulger Gallery has an inventory of over 25,000 original photographs of varying types, as well as over 5,000 books on photography (perk: free admission!). You should also check out Twist Gallery, which is a unique collection of fine art, beautiful architecture, and is also a glamorous, operating event hall!

Other major art centers include the Museum of Contemporary Canadian Art (MOCCA), the Art Gallery of Ontario (AGO), and Gallery 1313. Birch Contemporary offers work from Canadian and American artists and is found in a warehouse setting. Past showcases in the Birch Contemporary exhibits have featured abstract painter Jaan Poldaas, interactive artwork from Micah Lexier, and photography from Dutch photographer Toni Hafkenscheid. From fine art to emerging artists and mid-career artists, you’ll find just about every type of art offers you can find.

Unfortunately, the city has yet to come up with a Queen West art-pass, but many of the galleries in the area are free to tour, view, or hold open viewing nights for the public. If you are a creative or burgeoning artist, then you will find yourself continually inspired by the range of art available in this village.

Of course, it would be no surprise that upon visiting this neighbourhood you would fall in love with the vibe and would want to settle down in one of the Queen West condos for sale in the neighbourhood.

The architectural style of the Queen West Condos for sale range, surprisingly, from entirely modern to heritage-style renovations. While many of the buildings in this area resemble the heritage-style that is true to Toronto, developers included numerous modern updates so you won’t feel like your condo is behind on the times. There is a range of architectural and design options to choose from. Take Edge on Triangle Park, for example. Designed in 2013 by Urban Group, Edge on Triangle Park features sleek angles, glassy windows and metal finishing. Compared to The Candy Factory Lofts, which is an original heritage-style industrial conversion condo facing Trinity Bellwoods Park, then this means that future residents have a lot of options to choose from. You will find a large range of square foot offerings in the Queen West condos for sale.

Residents can also choose a condo that reflects the nearby neighbourhood. Appropriately, Art Condos, Westside Gallery Lofts, and Shangri La Condos Toronto all uniquely capture the artistic neighbourhood, while encompassing both the heritage-modern revival in downtown Toronto condos. Know that when purchasing a Queen West condo for sale, you are also buying into the local amenities, restaurants, and nightlife that are rampant in this area.

While art and trendy shops are great, this neighbourhood is brimming with restaurants and nightlife. The Queen West village represents a diverse range of dining options, from food-truck style offerings to fine dining. If you are looking for a taste of something different each day, then you’re living in the right neighbourhood. Queen West is home to Mideastern eats, burgers, Mexican, Japanese and sushi, kabobs, traditional diner food, ramen, and much more!

Some of the areas stand-out restaurants include:

Of course, next to the King West neighbourhood, Queen West is lively and has its fair share of entertainment. The cocktail bar Lobby features a unique atmosphere, resembling a tropical vibe. As a restaurant and bar, Lobby is a great place to hang out with friends after work in a tropical-style getaway (with tropical-style cocktails to boot!).

Another popular spot is Drake Underground, which is home to shows, nightlife, live music, and connecting people to music and art. Over 200 artists appear annually at the Drake Underground, so you are sure to see an artist you like. This basement nightclub and venue never sleeps!

Other spots in Queen West include Bar Noce, a cocktail lounge space that is housed in the back of an Italian restaurant. While not a bumping club, Bar Noce offers night owls a place of solace in the busy, big city. Grab a negroni and a late-night snack after a night out on the town, or make a reservation early on to experience their 2-class Wine Spectator’s award list and wine cellar. Ever so popular Sweaty Betty’s is a divey bar that is a great spot for your friends to get-together. You can bar hop in this area, which is just off Ossington, to explore La Flaca, Bar Fancy, Lipstick and Dynamite, and Otto’s Beerhall. You will not run out of places to explore in this neck of the woods.