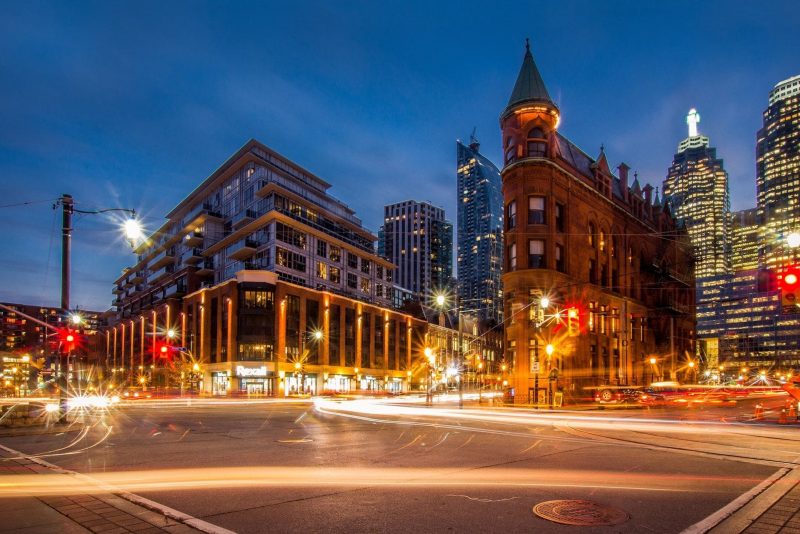 Toronto’s most Iconic Downtown neighbourhood, the St. Lawrence Market embodies the vibrant Toronto lifestyle that is now considered one of the world’s Top Cities To Live In. As the Global Liveability Report would have it, Toronto is ranked the 4th Most Livable city in the world when taking into account 5 major categories including: education, stability, infrastructure, environment, and health care. The one factor the report did not include is: Cool neighbourhoods with world renowned restaurants and nightlife, along with an amazing waterfront, exciting people, and the best condos! Enter St Lawrence Market condos.

Founded in 1803 and with two millennia of history, the Market has become an iconic destination in Toronto and also happens to be Toronto’s most mature neighbourhood. Food and Travel shows like “The Layover” featuring the late great Anthony Bourdain have profiled Toronto and specifically the St Lawrence Market because of its rich history fused with modern culture. The South Market building features over 140 vendors that showcase and curate everything from local delicatessens to seasonal Ontario produce. You will find fishmongers, fruit and vegetable vendors, butcher shops, cultural cuisine from all corners of the world, baked goods and more. It is a popular place for the Downtown crowd to get lunch and detached for an hour from the city’s hustle and bustle. Some of the iconic vendors you will find include:

This is barely even a snapshot of some of the best vendors at the St. Lawrence Market South Tower. If you only had 24 hours in Toronto and felt the need to get the vibe of the city, we would recommend getting lost in the South Tower after Intermittent Fasting, guaranteed good time!
The North Market houses 10,000 square feet creative culinary enchantment. The space is used from large social functions to exhibits, flea markets and keynote talks. You will also find a spectacular Farmers Market on Saturday’s showcasing local produce. It is a destination for everyone in the GTA, and people come from as far as Hamilton to Whitby in order to get their weekly fresh produce fix. You will also find antique dealers on the weekends, and the even space to house whimsical weddings and events.

The St Lawrence Market #SummerSeries is another immersive festival at the Market where the Market opens it’s patio to curious foodies and offers up a spectacular food, local merchants, art and music. 2018’s #SummerSeries will mark its 3rd year and has been a huge success. The festival typically runs in mid-July just in time for some fun in the sun.  Some of the other festivals the market houses every year  include RIBS, RIBS, RIBS!, Friday Night Market Feast, The Feast of St. Lawrence and Arts At The Market.

Being the epicentre of food culture in Toronto, one of the clever concepts that has been built out in the St. Lawrence Market is The Market Kitchen. This new age open kitchen has been built out to curate modern and classic cooking techniques. Used as an education facility to up and coming chefs and amateur home chefs at the same time, it is a creative space that anyone can be a part of. These intimate classes of 10-20 people typically cover International cuisines alongside local staples. There is also a popular “Farm To Table” theme that promotes locally grown produce and cooking techniques. Variety is the Name of the game here, and for $50 you can learn virtually any cooking technique or local cuisine in The Market Kitchen.

With an eclectic mix of classical architecture and modern conceptual architecture, St Lawrence Market condos for sale give residents a window to the past and simpler times. Condominiums like ‘The Esplanade Condos’ were modelled after the Flatiron style of architecture from the turn of the century, literally shaped in the form of a cast-iron clothing iron! Some of the newer fleet of developments include ‘Market Wharf Condos’ and the landmark ‘L-Tower.’

Other noteworthy St Lawrence Market condos for sale include:

Fun fact about the Market Wharf tower, there is a suite in the building known as the ‘James Bond Suite’…and it is EPIC. The building itself has a very entertaining facade highlighted by buildings that mimic waves. Given its proximity to the lake, it is a very clever design. Other contemporary towers like the L-Tower have drawn in world renowned architects like Daniel Libeskind to create a modern masterpiece. With it’s flowing glass exterior forming the perfect L shape, the condominium stands out as one of the unique towers in the city and with 600 suites it also happens to be one of our mega towers. One amazing luxury to people who live in the area is access to The Path which is essentially an underground pathway to navigate through the city parallel to the Yonge subway line. The Path is approximately 35 kilometres of underground pedestrian walkway lined with shopping, food stalls, and entertainment. Proximity to Union Station also makes St Lawrence Market condos a popular option for commuters.

Some exciting new condos that will be joining the lineup of St Lawrence Market condos, will include Sugar Wharf Condos, Time And Space Condos, and the Lake Side Condos.

St Lawrence Market condos are nestled in the perfect pocket of the city where residents have virtually every modern amenity at their fingertips. If you’re having a craving for a food adventure there are more than enough options including Hot House, Barsa Taberna, Biagio Ristorante, Hogtown Smoke, Charisma and Ghu-Kaku. It is foodie paradise.

As far as aperitifs and nightlife, there are a plethora of options. Belly Dancers and Moroccan food at the Sultan’s Tent, to the authentic Moscow nightlife vibe at Pravda Vodka bar. You can also take in Live Jazz at a Toronto Institution, Reservoir Lounge. And just down the street at the Sony Centre For The Performing Arts you can catch anything from Live Theatre, to stand up comedy, and concerts from some of your favourite bands and artists.

Steps from Union Station and Toronto’s Financial District, St Lawrence Market condos for sale have been desirable among young professionals and anyone looking to settle in Toronto’s Financial Core. Conveniently located across from the Lakefront, there are plenty of options for runners, bicyclists, and dog moms/dads. We love the vibe as neighbourhoods that are rich in culture typically attract like minded people including technophiles, creatives, Bay Street Brokers, and entrepreneurs. Living on the lake and in close proximity to the downtown core allows area values to continue appreciating at a faster rate when compared to other neighbourhoods in the downtown core. Much of the new condominium developments are currently being built in this pocket of the city and many exciting new developments are pre-selling in the St Lawrence Market district. We like the neighbourhoods long term prospects in terms of appreciation.

Sitting just above the Market Place is the St Lawrence Market Gallery, an art gallery in the centre of Toronto’s cultural epicentre. The Gallery is a window into the city of Toronto’s rich origin and pieces together how it became one the most exciting and diverse cities in the world. The Gallery features black and white film, original photography dating back to the 1950’s, and artifacts dating back to the industrial revolution. If you have a day of work and some spare time, the St Lawrence Market Gallery is a must do when you’re in the city.

One of our favourite events that we’ve been to was the Just For Laughs Festival in 2016 at the Sony Centre just down street from the St. Lawrence Market, and the headliner was Chris D’elia. An amazing night! For one to truly understand the complexity of the St Lawrence Market, you simply need to get lost in this whimsical neighbourhood in downtown Toronto. Truly one of favourite neighbourhoods in the city!