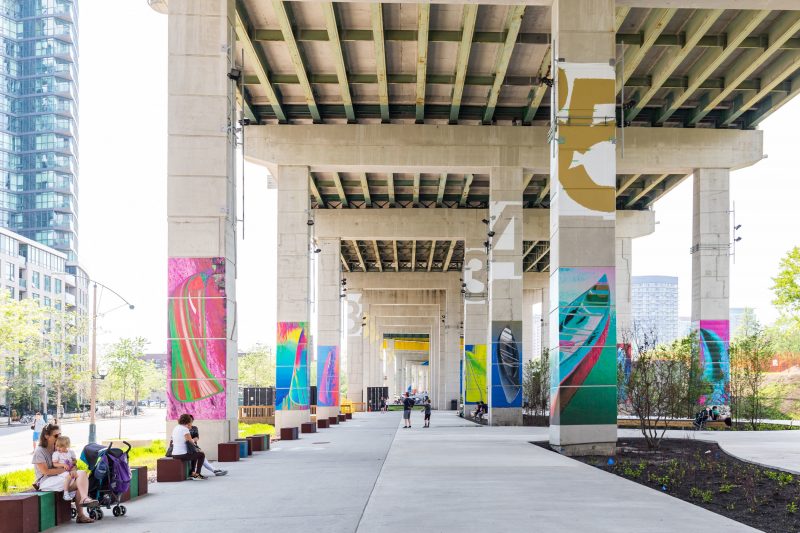 Established in 1793, The Fort York National Historic Site is a 43 acre landmark that has been preserved as a historic site for the city of Toronto. The origin of this cultural site comes from war time efforts to secure land from British invaders seeking to commandeer the land. Present day, much of the history has been preserved at the Fort York National Historic Site including some of the original war time structures. This has given this landmark Toronto neighbourhood much of its culture and can still be seen today. There are many museums and galleries at the site today offering Torontonian’s and visitors to the city a window to the past.

Currently, the Fort York neighbourhood is going through a revitalization which includes large scale residential development, with many builders sitting on vacant land that have plans to develop future high-rises for the city to help with the housing shortage and the urban sprawl initiative. Touring the area you will find many developers including:

The above developers have invested in the revitalization of the neighbourhood, and have either already built high density towers in the area, or are launching new Toronto condos in the neighbourhood.

Some of the Fort York condos for sale are in fact genuine hard lofts that have been converted into modern conversion lofts. One of the landmark Toronto hard lofts in the neighbourhood is the Tip Top Lofts. Located at 637 Lake Shore Boulevard West, the Tip Top Lofts were built in 1923 as a garment and textile factory by Tip Top Tailors and has since undergone a massive transformation into 256 unique modern hard lofts. The suite sizes get as large as 3,200 square feet, and one of the suites featured on Big City Broker starring Brad J. Lamb had a full size pool on the balcony. Truly a standout condo in Fort York, the Tip Lofts are one of Toronto’s most sought out condominiums.

Another couple of local attractions worth stopping by while you are in Fort York would include Ripley’s Aquarium of Canada and the CN Tower. If you are looking for a fun playful date night, or explorative time out, Ripley’s Aquarium is a great starting point. With a diversity of marine biology to see in a modern LED infused backdrop, there will be plenty of photo-ops on data night. Check out their website for Live Webcams of marine biology including their Jellyfish Cam here!

The CN Tower is also a brief stroll from Fort York just 1.7km’s away. Another great day out with superb views of the city at the famous 360 Tower. You can even catch a 7-minute Helicopter Tour overlooking the vast streetscape and waterfront and snap some spectacular photos of the city. If you have a fear of heights you can still explore the city aboard a Sightseeing Toronto Hop-On Hop-Off Bus Tour. We would even recommend hopping on Airbnb and hiring a local Photographer to do a tour of Fort York while snapping Instagram ready portrait photos near all the Fort York landmarks. There are endless things to do in the city if you have the time.

Parks Near The Fort York Condos

Some of the parks in the immediate neighbourhood of the Fort York condos include:  Garrison Common, Canoe Landing Park, June Callwood Park, The Gore, Coronation Dog Park (for all the furr moms and furr dads), Coronation Park, Stadium Road Park and the Toronto Inukshuk Park. The overall vibe in the neighbourhood is a healthy outdoorsy vibe with a strong focus on physical culture. One of our favourite calisthenic parks is located at Sir Casimir Gzowski Calisthenics Park, a place where you will routinely find the locals doing chin ups and kettlebell swings.

You will find Toronto’s whimsical skate park under the Gardiner Expressway at The Bentway just under the bridge at Fort York before the offramp by Spadina. The Bentway converts in the summer to many outdoor events including the World Music Festival and a massive Beer Tent featuring many local microbreweries and craft beers. It is a classic example of the city of Toronto embarrassing the urban sprawl and optimizing the city’s space.

Some of our favourite restaurants in the city can be found in walking distance of the Fort York condos. Here is a short list of some of the restaurants that we would recommend checking out anytime you have a chance:

Lee (this one is a personal favourite!)

There are plenty of smaller mom and pop options in the area, and as Fort York is revitalizing, we are expecting to see a fleet of newer lunch and dinner options in the area in the near future. Any time you see a plethora of new condos for sale, you will find several new commercial retail spaces open up as well as new modern restaurants and lounges. We’re excited to see some of the new restaurant startups coming to Fort York in the not so distant future.

Our favourite floor plans out of the above Fort York condos for sale include some of the sizeable 1+Dens at West Harbour City – 628 Fleet Street and Malibu Condos Toronto – 600 Fleet Street. Some of the best value suites in the city in terms of price per square foot can be found at Atlantis and Aquarius Condos Toronto – 219 and 231 Fort York Boulevard. And one of our absolute favourite genuine hard loft conversions in Toronto can be found at Tip Top Lofts – 637 Lake Shore Boulevard West. If you are searching for pre construction Fort York condos, there are some great options coming up at Playground Condos – and Fortune at Fort York, both excellent value in this excellent downtown Toronto neighbourhood.

Fort York Condos and the Future

We see Fort York condos appreciating in value at an above average rate relative to other downtown Toronto condos, and this fantastic upside makes condos in Fort York an excellent long term investment as well as a comfortable place to live.