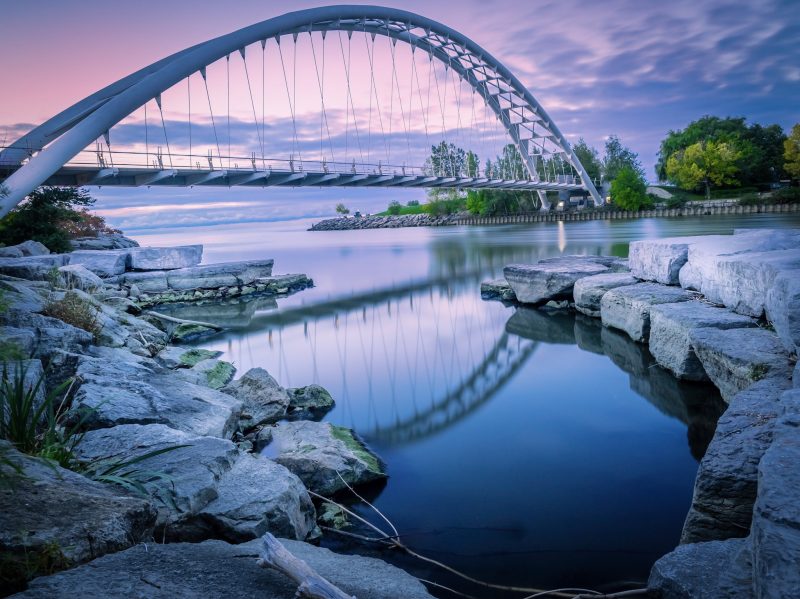 With a rich history dating back to 1615, it’s hard to believe the first settlers date this far back, making Humber Bay 400+ years old. The clear perimeter of Humber Bay runs between the Humber River and Etobicoke Creek. Forming one fourth of what we consider today Etobicoke, the other three subsections of Etobicoke include Mimico, Long Branch and New Toronto. The municipality of Etobicoke eventually merged with 5 other municipalities to comprise what we now consider the great City Of Toronto. Without giving it defined borders the city at large considers Humber Bay the region stretching from Park Lawn Road south to Lakeshore, and then East until the Lake Shore connects with the QEW. This region is defined by Humber Bay condos, and is the densest pocket of high-rises in Etobicoke. More on that momentarily!

What Did Humber Bay Look Like Before All The Condo Developments?

It is so fascinating to see the evolution of this once motel dense city. Humber Bay was originally defined by tourism, and entertainment with the famous Toronto Palace Pier. Locals and out of town pleasure seekers would commute to Humber Bay to partake in the many festivities hosted by the Pier. Essentially a massive pleasure dome, it was the venue of choice in Toronto, and anybody who was somebody could be found at the Pier indulging in some fun. The original concept was to be known as the ‘Sunnyside Palace Pier’ and was to be modelled after a worldwide concept originating in England that believed in the old adage ‘If you build it, they will come.’ The goal of the Pier was to create an enormous leisure centre where families could play games, rollerblade and skate, dance, drink, and have a good time. Apparently funding was slow and there was a lot of behind the scene horseplay, but eventually this amazing year round entertainment complex was completed in 1941.

Some of the events that the Sunnyside Palace Pier hosted included:

Eventually in 1963 the Pier burned to its ashy demise, and a concept for Humber Bay Shores was slowly conceptualized. The first condo developed in Humber Bay was an homage to the original entertainment complex and was named Palace Pier condos. This was in 1978, and because of its spectacular water views and enormous floor plans, it was a big hit. Moving forward, it took 13 years for the second tower to be developed and built. Once the second tower went up people started to take notice and there was a sudden desire to live in a condo by the lake. However the city’s love affair with Humber Bay condos began in the mid 2000’s when the new developments and a vision for the waterfront community started to take form. The first condominium and catalyst to the new vision was ‘Voyager Condos’ a multi-tiered step tower, with a modern facade that definitely drew eyes. Developed by Monarch, it was a sign that the major developers were buying into the vision of Humber Bay Condos for sale lining the waterfront, and developers like: Empire, Conservatory Group, Omni Group, Mattamy Homes, Times Group, Camrost-Felcorp, Canderel Stoneridge, and Davies Smith Developments.

Some of the standout towers in the neighbourhood include the Explorer condos off of 58 Marine Parade Drive which offers some of the most spectacular water views. Units on the 6th floor or below with a South view actually feel as though you are on the water.

Another notable condo in Humber Bay would be Ocean Club Condos consisting of 2 point towers at 59 and 60 Annie Craig Drive. Much like the Explorer, Ocean Club condos are built off the waterfront and have some of the most spectacular water views of the city. The unique feature of lake views in Park Lawn is the fact that you see the entire Downtown Toronto Waterfront, Skyline, and CN Tower from a distance. The views are enhanced from Park Lawn, compared to those who live in the Downtown Waterfront, as they see only water. Particularly the 05 models at 59 Annie Craig Drive have a glorious view of the Downtown Skyline along with sweeping water views.

Other noteworthy Humber Bay condos for sale include:

To truly understand the Humber Bay vibe, one would have to visit the neighbourhood and go for a walk/run/bike ride through the Humber Bay trails. Surrounded by nature and inspired by water, Humber Bay condos are a big hit with outdoor enthusiasts. You get a unique health inspired vibe mixed with ambitious professions and the well adjusted.

In terms of demographic Park Lawn condos have the perfect balance of young professionals, down-sizers, retiree’s, and small families. The result, a diverse mix of the young and young at heart.

Commuters love Park Lawn because of proximity to the QEW and its ability to get commuters East to West in an ideal central location. Commuters can get to the Downtown Core within 18 minutes by car which makes Lake shore condos a great option for anyone working Downtown. Here are some of the reasons residents of Humber Bay seem to love it out here:

Things To Do At Humber Bay

Start by inflating the ties of your bicycle, or getting a fresh pair of ankle socks to go with your running shoes. Humber Bay is known for its physical culture. The locals love their trails, and on any given day (even in the winter) you will see joggers on the Martin Goodman Trail taking in the beautiful scenery.

If you’re feeling groggy skip the jog and hit up a local coffee shop like Birds And Beans Coffee and get your java fix or you can grab breakfast at Huevos Gourmet. Next you might want to explore Humber Bay. A great trail to visit would be Humber Bay Park directly across from Marine Parade Drive. This lush trail is like a mini peninsula off of the shoreline, and you will routinely see yachts, boats and seadoos taking in some sun. Great place to meditate or escape the city for an hour for some inner peace. Maybe lounging at the beach is your thing. If so, there’s a hidden gem en route to Humber Bay at Marie Curtis Beach. Whether you would like to grab a pint or have lunch, Humber Bay has some options. You can check out Firkin On The Bay which has a fantastic patio and great summer vibe. Or you can take in Eden Trattoria, a Humber Bay classic. The locals absolutely love this classic Italian eatery. If you’re going in the evening, most nights you’ll need reservations…totally worth the wait!

While by the lake, you have to take in the Humber Bay Bridge. Fun fact, as we write this we’ve noticed ‘Love Locks’ starting to find their way on the bridge rails. Hiking by the Bridge has been a popular date night destination, and the lookout point just east of the Bridge is nothing short of spectacular.

2 amazing installations were landmarks at 2 of the popular look out points. One was the iconic TORONTO installation that you would see all over Instagram. The other was Humber Bay’s beloved ‘El Corazon’ (The Heart) in Spanish. This lovely 25 foot oversized sculpture of repurposed driftwood created by local artists Julie Ryan and Thelia Shelton was a fixture at the Bay. You could see his giant red heart within the unbelievably realistic chest cavity, and it was a true piece of community art. Update – The ferocious ice storms of 2018 unfortunately pulled both installations into the lake and since there has been a Fundraising campaign to create 2 new installations by the Bay. The residents excitedly await the new pieces, and we will surely update you as the projects unfold.