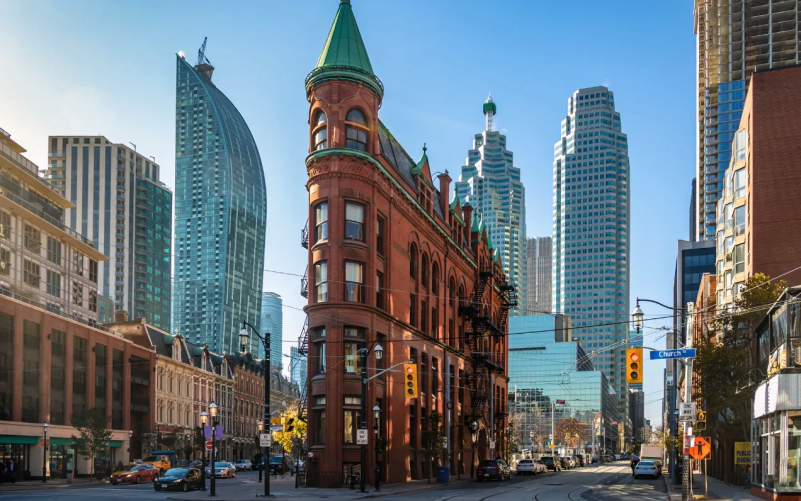 Toronto’s downtown core is the most densely built up area of Toronto consisting of major banking towers, corporate headquarters, high-powered legal and accounting firms, insurance companies, stockbrokers, and of course high rise residential condos. This area of Toronto’s downtown is known as the Financial District, a very important, if not the most important sector of Canada’s economy. The main downtown core stretches from University Avenue to Yonge Street, and from the Gardiner ExpressWay to just north of Queen Street. It is not a massive area by any means, but there are plentiful downtown condos for sale for anyone looking to enjoy the city’s most lively part of town.

Toronto’s Downtown Core is where you’ll find most of the heavy hitters.  A lot happens here. All 3 major sport teams in Toronto play within the downtown core. You’ll find the Toronto Maple Leafs and Toronto Raptors at the ScotiaBank Centre, while the Toronto Blue Jays are a couple blocks west at the Rogers Centre. Financial towers, residential condos, and commercial buildings share an underground tunnel system known as the PATH.  One of Toronto’s greatest projects that connects various parts of the city through the underground system, as well as lining the tunnel with retail stores, restaurants, shops, and a connection to Toronto’s Union Station. Developers of late have started integrating connectivity to the PATH with their downtown condos for sale, making the commute to work insanely easy, and warm!

On any given weekday it is estimated that 100,000 people come and go from the Financial District daily. Be it those who live in a downtown condo, or come into the city from the GTA.  Not only is it an extremely critical source of revenue for the Canadian economy, it is also quite historic and record setting. The tallest buildings in Canada are here such as the First Canadian Place, Scotia Plaza, and the Adelaide Hotel.  Not only that but many monumental buildings are situated in the downtown core such as the Fairmont hotel and Toronto’s Brookfield Place bring prestige and enrichment to Toronto’s core. Toronto’s downtown core development is something truly spectacular and city planners have done a fantastic job incorporating the historic buildings into the new modern builds that are defining Toronto on a global scale.

Living in a Downtown Toronto Condo

Those who are looking for a Financial District condo definitely enjoy the fast paced life of Toronto living. Choosing to purchase a downtown condo is a great way to enjoy the city to its fullest, in our opinion.  A typical work and play day for those living in the downtown core can be something like leaving your office, heading to the Leafs game, and then walking across the street to your condo at Maple Leaf Square!  At any given time you can find a wide assortment of downtown condos for sale that will fit your needs. Be it connectivity to the PATH, easy access to transportation, a super sky rise with panoramic views, or something with all of the above you’ll be able to find it in the core.

Something we personally love about living in the core of Toronto is the ease of living in one area, but enjoying the fruits of another. Toronto’s Entertainment District, Fashion District, Distillery Market, and Waterfront are all incredibly close to the core. Working and living in one part of the city while being an uber ride away from some of the most desired pockets of Toronto is an amazing attribute to those who own a condo in the core.

Your options are limitless when considering everything you can do at any given time when you live in a downtown condo. You quite literally have Toronto at your fingertips. The best restaurants, lounges, nightlife, art galleries, live events — everything is within striking distance when you purchase a condo in Toronto’s core.

If you were to live in your downtown Toronto condo for 10+ years, you still wouldn’t have enough time to experience all of the fine restaurants in the core, but we’ll try our best to guide you where to go here. If you’re looking to kick back after work and watch any type of sporting event while enjoying an easy meal, the choice is Real Sports in Maple Leaf Square. Real Sports is a world renowned sports bar serving local cuisine and an enormous sit up bar. Make sure to book well ahead of time, especially if there’s a Leafs game on. Another staple restaurant to get a fantastic meal would be Richmond Station co-owned by a winner of Top Chef Canada, Richmond Station should hit the spot!  To top off our list for an easy meal where you won’t be disappointed is Cactus Club Cafe, located in the First Canadian Place on Adelaide!  Cactus Club soared in popularity downtown over the last few years and for good reason.  Offering an outdoor patio with a live DJ (weekends), this resto-lounge offers quick tasty meals and has a fantastic lunch menu for those stepping out of the office.

Other great restaurants in the Financial District that double as date spots, or a lunch getaway from the office would be Kings Taps, Pai Northern Kitchen, and Canoe Restaurant which offers views from the 54th floor of the TD tower!  Lastly, and a personal favourite of mine would be Byblos, a Mediterranean inspired menu with both local and international inspired dishes.

Those searching for downtown condos for sale will be throwing themselves head first into the nonstop culture and lifestyle that comes with the Financial District. Work, play, eat takes a new meaning when you’re living near Yonge street!  For those who are able to step back and enjoy Toronto for the beautiful city it is will fall in love with living here.  Taking in the historic buildings, landmark art galleries and timeless architecture, there are endless bucket list things to do in the city’s downtown core. Every corner of downtown there is something new to uncover and explore. Take a look at a small list of examples for the attractions and exhibits that happen in the core of Toronto!

And I feel it goes without saying that once you purchase your downtown Toronto condo you have to at least once experience each of the Maple Leafs, Raptors, and Blue Jays games (especially during the playoffs).

Already being the most dense area of Toronto it is hard to imagine that the core is still growing. Developing the core will likely never end as historic buildings need to be re-developed to accommodate urban sprawl. A perfect example of this is the ongoing Pinnacle SkyTower project, planned to be Canada’s tallest residential building at the base of Yonge and Lakeshore. Those considering downtown condos for sale should also be privy to the development and future city plans. Future planning also calls for the reconstruction of the Rogers Centre as well as improvements to the PATH and never ending Gardiner Expressway work.  Living with these ongoing developments is part of any major city life and Toronto is no different. The commitment to improvement and betterment of the city is a sure tale sign that purchasing downtown Toronto condo is a safe investment for the foreseeable future.