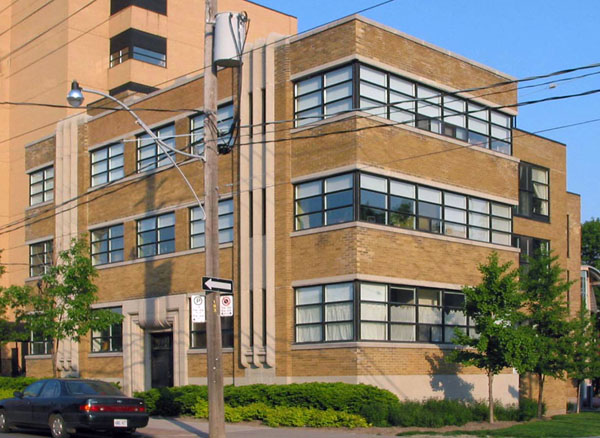 The traditional yellow-brick buildings of West 833 feature bold, modern designs mixed with a classic yellow-brick structure. With large windows, lots of patio space, and a lovely list of amenities, you’ll be eager to move into your new home in West 833.

The condo building of West 833 is located at 833 King Street West in the original structure of a perfume factory and converted to condos in 1998. It is constructed out of entirely yellow-brick, with thick black panelling framing each unit. The original structure is only the first three floors, and the upper levels were added on.

Most of the units get to enjoy their own patio space or at least open up one of the windows for a Juliette-style balcony. Inside this seven-storey building, you’ll find 52 hard loft units and soft loft units, which range from 580 square feet to 1,600 square feet! That’s right, tucked away in this traditional-style building are beautiful hard lofts. No wonder these lofts are in high demand!

Residents can choose from mezzanine-style layouts with bedrooms at the top, as well as one-bedroom and two-bedroom units. They are perfect for small families as well as young professionals!

You can expect to find massive ceilings, up to 18-feet tall, as well as two-storey units, exposed concrete, floor-to-ceiling windows, and open concepts. With a lot of historical charm and those desirable hard loft features, the condos at West 833 are a real gem!

Here at West 833 Condos, residents get to enjoy numerous high-end amenities. From a party room to a rec room, the amenities of the West 833 condos are perfect for those who love to socialize and spend good times with friends. With convenient visitor parking, know that your friends can come over at any time without any hassle.

In addition to this, the residents at 833 King Street West can bring along pets, so you don’t have to say no to a beautiful home at West 833 just because you have pets. There’s also a gym on-site, so there is no need for an expensive gym membership if you want to pass on it.

Other benefits of living here include a secure parking garage, included in your maintenance fees, a security system, and a meeting room. The is also a rooftop deck where you can enjoy sunsets throughout the summer.

Know that maintenance fees are modest, and cover everything from the common spaces to hydro, AC, parking, heat, water, and also building insurance.

If you are looking to live in the King West neighbourhood, then you must consider West 833. These condos are located at 833 King Street West, just where Niagara meets up with King Street West.

The residences at 833 King Street West get to stay connected to some of Toronto’s most lively areas, from the Liberty Village to the waterfront promenade. And with plenty of transit, you won’t hesitate to whisk away across town. Hop on a King Street West streetcar to get to Union Station, the VIA rail, the GO train and the UP!

Restaurants nearby to your home include the Beast Bodega, WRST, Belfast Love and Public House, Gusto 101, and Pennies! For conveniences, you have plenty of transit to connect you along King Street West. There is also a Starbucks next door, as well as an Esso gas station, nail salon, Shoppers west on King Street, and a Longo’s. These homes are also close to the stretch of Queen West that is home to restaurants like The Drake Hotel and El Almacen!

Because of its proximity, you’ll regularly explore everything that Liberty Village has to offer, as it is a fun community. Locus 144 has some tasty Italian, and there is also traditional pub fare at the Brazen Head Irish Pub. Be sure to check out Williams Landing which is in the area, as well as Balzac’s, Liberty Commons at Big Rock Brewery, The Craft Brasserie and Grille, and Merci Mon Ami.

Living here at West 833, you’ll be close to major Toronto event hotspots, such as the Toronto Island, The BMO Field, home to Toronto FC’s and the Argo’s, the Coca-Cola Coliseum, which hosts the annual X Canadian National Exhibit, and Budweiser Stage at Ontario Place.

This spot is also great for those who want a breath of fresh air sometimes. With green spaces and quick access to the waterfront trail, you won’t run out of things to do. These condos are right next to Stanley Park, which has a space for sports, a splash zone and an off-leash dog park!

Triloft Developments is a leading development firm in Toronto. Some of their notable builds include Space Lofts, The Kings, The Kings Lofts, and West 833. These constructions are long-lasting and built using high-quality materials.