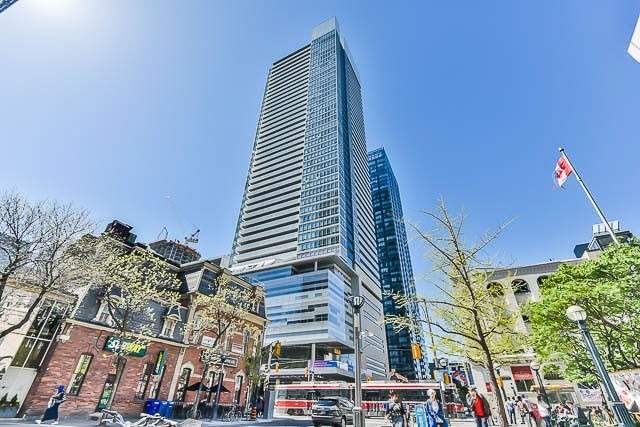 Another fine residential community by a talented team. The Entertainment District won’t run out of housing when condos like Festival Tower are populating the area. Daniels Corporation has done it again with interiors by Mike Niven and compelling architecture. Kuwambara Payne McKenna Blumberg (KPMB) has collaborated with Kirkor Architects and Planners to create a 46-storey masterpiece of elegance and luxury.

The association of the name of the complex is immediate. The structure contains the TIFF Bell Lightbox on the first nine floors, the home of the Toronto International Film Festival. In fact, Daniels worked with Czech-Canadian filmmaker, Ivan Reitman. As a result, Festival Tower contains a state-of-the-art 55-seat cinema.

Everyone agreed on the hotel-like amenities and extensive use of fine-grade natural materials. They are present everywhere, used judiciously and with careful attention to the environment and needs of the tower occupants. Contemporary taste demands full in-house services and impeccably-designed suites.

Beyond the amazing full-scale movie house, Festival Tower has an assortment of amenities that boggle the mind. The cinema lounge features a catering kitchen and concession stand. The Toronto International Film Festival takes residency here when its regular venue, the TIFF Bell Lightbox, is overbooked.

A bit higher up is the rooftop terrace with grills and cabanas. When residents prefer to remain inside, they can enjoy the indoor pool and fitness centre and spa. Kick boxing, tai-bo, Pilates, and yoga are among the offerings of the professional trainers. There is a sauna, sports lounge, meditation garden, and whirlpool adjacent. A well-kept secret is the Tower Club on the 10th and 11th floors. A two-story bar and café/restaurant rounds out the services. For everyone, the 24-hour concierge is on call.

The ease of condominium living is evident in all 378 suites, ranging from 500 to 2,760 square feet. They are well appointed with chef’s kitchens, complete with top-tier Miele appliances and fine millwork. Islands expand the countertop space and are covered in quart. They contain washers and dryers and extensive storage. Bathrooms are equally remarkable and state of the art. Despite all the modern conveniences right at home, residents can avail themselves of housekeeping and laundry, room service, and even dog walking. It is a well-thought-out and smoothly-running system designed to impart luxury and sophistication to modern urban living.

There are studio pied-à-terres and one- and two-bedroom units with a choice of floor plans. Penthouse units that can be accessed by a private entrance on John Street are spacious and airy with 11-foot ceilings and enormous windows. They are privately accessed on the 45th and 46th floors. Luxury features are prevalent and include radiant floor heating in the master bedrooms.

Sustainability is ensured for the green folks who will appreciate the individually-controlled air and heating system. They also relish the quality materials and attention to the use of natural light.

Who wouldn’t want to look out their living room window and see the action of the Entertainment District at their feet? When you live on King Street and John, you are privy to the rich local culture and recreational venues. The restaurants are plentiful as are the theatres and clubs. Think of Sweet Jesus, Milagro, Wayne Gretsky’s and Byblos if you prefer not to wander too far. Then there is La Fenice and the Oliver & Bonacini Canteen within the hood.

Film buffs will be spending time at the TIFF Bell Lightbox and the film reference library that give the condo a real cachet with the cinema crowd. Staying in the region, symphony lovers have the Roy Thomson Hall and drama aficionados the Royal Alexandra and Princess of Wales Theatres and the Four Seasons Centre. There is something for everyone, hence the enormous popularity of the area. Sports venues like the Air Canada Centre house the Toronto Maple Leafs and Toronto Raptors, while the Blue Jays and Argonauts can be found at the Rogers Centre nearby.

Mass transit is the best with the bus, St. Andrews station, King and Spadina streetcars, and Gardiner expressway and Lakeshore Boulevard nearby. Toronto can brag about its incomparable system that reaches every nook and cranny of the city. Residents of King West have many options if they wish not to go on foot.

Daniels Corporation is an experienced and savvy builder in the Greater Toronto Area. Their team knows how to work with the best in the commercial and residential real estate business to produce structures of import and refinement. They have been behind the boundary-breaking initiatives that have transformed the face of the city. Artwork Towers, The Logan, Parc Towns and Prosperity Park are among their recent projects.