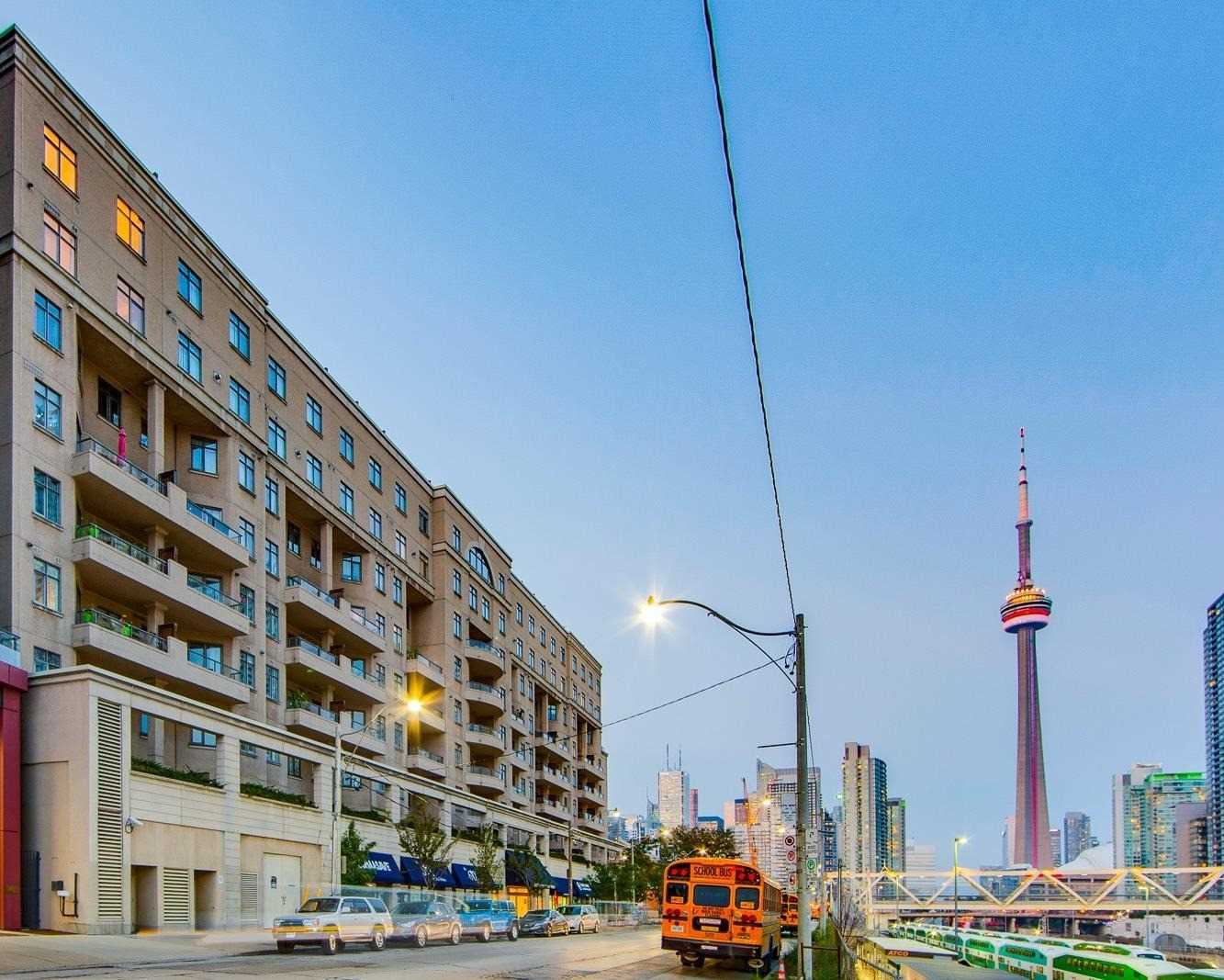 Front Street village-style living in King West Toronto. If high-rises are not your preferences, Portland Park Village is an appealing alternative with its quiet courtyard. It is a diverse project by Cityscape Development Corp opened in 2001 offering large suites and two-level units. Of interest is the contemporary geometric architectural design with lengthy covered balconies. The façade is artfully punctuated by distinct sections for visual variety.

Given its breadth over an entire block in King West, the village has three addresses: 550 Front Street West, 11-29 Niagara, and 4-14 Portland Street. The condos are urban residences considering their location in the heart of the Fashion District with all the surrounding culture and recreational venues associated with downtown. Working professionals appreciate the proximity to the Financial District.

While you may feel apart from the hustle and bustle at first, you will soon realize that you are in the centre of the action. Every possible form of entertainment and amusement surrounds your home. If not, you have some of the best mass transit in the world to take you near and far.

Design and sizeable floor plans are one of the hallmarks of Portland Park Village. There are a variety of lifestyles within one and two-bedroom units with an average size of 1,100 square feet. Several open-concept three-bedroom suites on two levels have multiple baths and extensive storage. All enjoy high ceilings, roomy kitchens with the latest trend in appliances, and light-enhancing picture windows. Large private balconies and terraces are a definite plus. All the comforts of home are built in, with a few extras.

Apartment-style condos on Front Street West are adjacent to the 74 coveted and charming Georgian-style townhouses on Niagara and Portland that measure out to 2,000+ square feet. The light-flooded interiors are simply gorgeous. The residents are as varied as the floor plans ranging from young professionals and families to downsizes and the newly retired. If you relish a bit of calm and quiet, the village is a definite place to consider. While the amenities are limited, there are corresponding low maintenance fees. There is, of course, a fully-equipped gym and fitness room as well as barbecue area on the rooftop deck and terrace. This is the place to see the best sunsets while enjoying al fresco dining. But you don’t need much with a major park down the block.

The good life is all around 550 Front Street West. The Fashion District is drenched in excitement with art galleries, eateries, shops and lounges disbursed throughout the neighbourhood. When you have had your fill of boutique browsing on King Street, there is plenty to tempt you such as the Queen street music and shows.

In addition, theatres and sports venues complement an assortment of concert halls and cinemas in the adjacent Entertainment District. For good times out, try Marben or Le Select Bistro when you don’t want to venture far. Trendies appreciate that locally-sourced food is common. They also know that the best sausages and beer can be found at WVRST and the best baristas at Thor Espresso Bar on Bathurst. And then there is The Keg Steakhouse, Buca, Gusto, Rodney’s Oyster House and Brassaii a stone’s throw to the northeast. Streetcars and buses can accommodate those who want to enjoy the ease of mass transit. A great trek is a trip to Canoe Landing on the way to the waterfront where many recreational activities await.

Services like banks, pharmacies, dry cleaning, tailors and salons are in your neighbourhood. For meal preparation, gourmets go to Fresh & Wild Food Market on the corner of King and Spadina, Sobeys on Fort York Boulevard (near Spadina) and The Kitchen Table on King and Bathurst. This is your world and it is full of the delights and delicacies of everyday life. Last but not least, the streetcar service is beyond compare and connects to north-south lines and the Yonge University subway. Living the urban high life includes convenience and ease.

Looking at the projects of Cityscape Development Corp, one finds a wide range of structures. Among them are Pure Spirit Lofts & Condos, Massey Estates and Mansions, Cityscape Terrace and The Distillery. The company principles have the unique gift of site evaluation and strategy formulation. With their architectural associations, they are well positioned to produce some of the most innovative buildings in the Greater Metropolitan Area. They have garnered many awards over the years for project excellence such as The Heritage Award for Architectural Conservation and Craftsmanship.