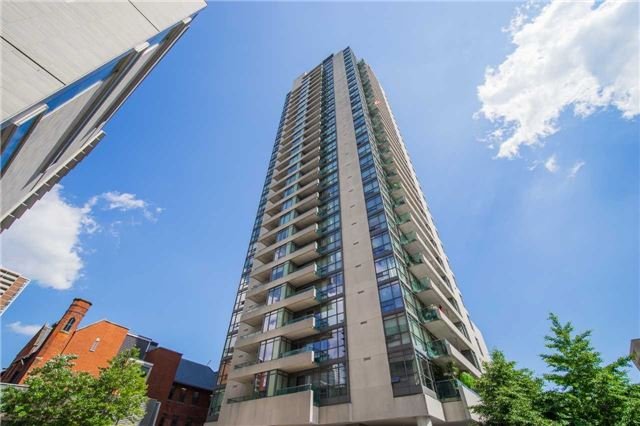 Radio City Condos are one of the most historic landmarks of Toronto, the former headquarters of the Canadian Broadcasting Corporation, was elegantly signed into one of the most beautiful residential condos buildings, aptly named, Radio City. The Radio City condo complex is located at 281 Mutual Street, in the Church Street Corridor of Toronto. As part of the redevelopment, the entire complex consisted of two high-rise condo towers, along with a smattering of street-level townhomes. While one towers 25 storeys, the other stands at 30 storeys, and both provide over 400 units for sale or rent. 281 Mutual Street is truly an amazing sight, very rare to find in downtown Toronto. This is due to their amazing network of courtyards and a public piazza, made by the two precast concrete glass point towers, along with the brick townhomes, which joins the National Ballet School of Canada in the same site. The Radio City Condos is an incredibly classic and historic site, where residents will be welcomed with the great amenities of the building, the benefits of the prime location and the history of the structure.

The simple yet elegant condos at 281 Mutual Street offer comfortable living with great amenities. The suites are incredibly well designed with nine-foot ceilings for a wide open spacious feel which is further compliment with the bright floor-to-ceiling windows. The natural light brilliantly fills the space and the large living areas. The spaces continue on as the units open into the private balconies that provide stunning visuals of the city itself. Radio City features are just as plentiful as its units. Residents can take advantage of a full fitness centre with steam rooms, as well as an aerobics studio for even more cardio workout. A wonderfully designed courtyard provides a breath of fresh air. One of the better aspects of 281 Mutual Street is its completely pet-friendly policy. The units are designed with enough space for a furry friend, and the natural light can provide a great distraction for a hyper kitty or curious dog. With two towers on hand, as well as great townhomes in the same complex, potential residents have quite a selection of options and layouts for their dream home.

If a more active lifestyle if preferred, then the location of the Radio City Condos is no slouch. Located at the Church Street Corridor, potential residents can find easy access to public transportation, with the Queen Street streetcar nearby, and the YongeUniversity subway line within walking distance, Toronto will have never seemed more within reach. For drivers, the Gardiner Expressway and the Don Valley Parkway are but a few minutes drive away. Given what the 281 Mutual Street used to be, it’s located is considered to be a cultural hub; with many cultural, arts and entertainment venues nearby, it’s hard to find a more well connected residential building. Residents can enrich themselves with the National Ballet School, Phoenix Concert Theatre, Ryerson Theatre School and many more artful venues at their disposal to explore and enjoy. Even alternative recreational activities such as the Riddle Room, The LCBO & Beer Store are both walking distance away. Clients can choose from their pick of Japanese, Middle Eastern, or Ethiopian themed restaurants all within walking distance away. The neighbourhood is smack dab in downtown Toronto, offering all the acclaimed hotspots that the city has to offer. Within walking distance is Woody’s, one of Toronto’s hottest bars, as well as Dundas Square, and the major mall, The Eaton Centre. Residents of the Totem Condos will get the full Toronto experience by being front and centre to the city’s most bustling area.

The developers of the Radio City condos are Context Developers, multiple award winning developers from Toronto. Formed in 1997 by Stephen Gross and Howard Cohen the company is focused on the development of mixed-use projects, condominiums and affordable rental housing in Toronto’s central neighbourhoods. With over 20 years of experience with building projects within Toronto. Some of the awards won by Context Developers include City of Toronto Urban Design Awards, Award of Excellence by Canadian Architect Magazine and Ontario Association of Architects. They have also been named the BILD Project of the year. The CMHC named one of their projects as the most innovative building. Context Developments are one of the most award-winning and critically acclaimed real estate developers within Canada. Radio City condos itself was named the National Urban Design Award Winner by the Royal Architectural Institute of Canada, The Canadian Institute of Planners, and the Canadian Society of Landscape Architects, and won the Global Award of Excellence from the Urban Land Institute.