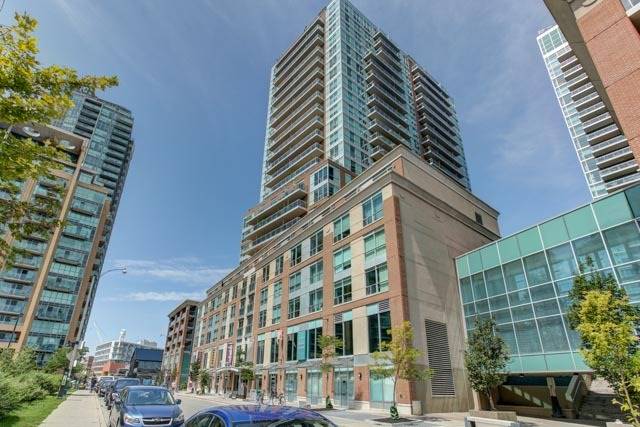 One of the first condo residences in the highly sought after Toronto neighbourhood of Liberty Village, happened to be the Battery Park Condos, which is still considered one of the appealing buildings of the city today.

Battery Park Condos stands tall at 23 stories at 50 Lynn William Street and offers  residents over 300 units to choose from for sale and rent. The building itself is a mix of brickwork and glass on its facade, and its reputation far exceeds itself as being one of the more high quality and reliable condo buildings in Toronto.

The building shares its space with ground level commercial businesses, and features two entrances for its residents, on two different sides of the street. Built by Toronto’s oldest real estate developer, Battery Park Condos comes with reliability, quality and a prime location for any potential home buyer or investor.

The interior of the condo building matches its strong exterior with many options and choices for its residents. The suites at 50 Lynn Williams Street range from 340 sqft to 1,176 sqft in size and offer residents between studio apartments, spacious two-bedroom suites, and even certain two-story townhomes. This makes the Battery Park Condos be perfectly suited for residents from different lifestyles, backgrounds who want the best location and home to suit their needs.

Each unit comes packed with a wide array of built-in amenities and features making it a luxury to live in. The unit layout is an incredibly modern and open concept, allowing for maximum use of the space. The large windows invite natural light into space, making space seem even brighter. Especially when this light bounces off the natural laminate flooring. Contemporary kitchens and living areas, along with private balconies with breathtaking views all add to the energy of 50 Lynn Williams Street.

The standout amenity of this Condo building is something rare that is not found in other West-End condo buildings; being pet-friendly. The condo building invites pet-owners in by creating an environment that is suitable for them and their pets, with open arms.

Liberty Village is considered one of the more fun and energetic neighbourhood of Toronto, without the congestion of the more metropolitan areas. Named after Liberty Street, where the prisoner would walk by when released, the area now is a whole new world that still retains the exuberance of its origins.

With easy access to the Financial District and Waterfront, the area almost acts as a gateway between different tastes and worlds. Not to mention the closeness to the neighbourhood to others such as the Entertainment District, Little Portugal, and King St. West as well.

Battery Park Condos benefits from being located at the Liberty Village, allowing residents to take full advantage of everything the neighbourhood has to offer. Being a fast growing area also helps as residents have continuous access to the newest shops, fine dining and innovative recreational activities not found anywhere else.

The neighbourhood also features unique and niche shops that aren’t found anywhere else. Gyms that feature rock climbing, exclusive nutrition shops. With lots of pubs and bars nearby, the light life is also pretty fun and vibrant as residents get to experience the infamous Balzac’s, or the Brazen Head Irish Pub.

For a breath of fresh air, you can pop over to Liberty Village Park, stroll down to the parks on the Waterfront, or you can take a walk north to Trinity Bellwoods on Queen Street, a great spot for all kinds of outdoor recreation from baseball to picnics.

When it comes to outdoor activities, the neighbourhood is no slouch. There are many parks located in the area such as Liberty Village Park, Gateway Park, Lamport Stadium. Residents can even enjoy professional sports in the area such as BMO Field for Toronto Football Club matches and training.

Liberty Village also makes it easy for the public to come and go with many different connections and access to public transit and commuting. The area has many connections to and from TTC streetcars on multiple routes, making everything even more accessible. The location is even car friendly with the Gardiner Expressway incredibly close as well.

The Battery Park Condos were developed by Monarch Group, now known as Mattamy Homes. Founded in 1978, Mattamy now is considered one of North America’s largest privately owned home builders. The company has over 90,000 homeowners and hundreds of home communities in their name.

The founder of the company developed New Urbanism that saw urban homes designed be infused with green space and consider intangible elements like character and uniqueness to be built into each of his properties. This approach into the company would result in Mattamy being one of Canada’s largest home builders.